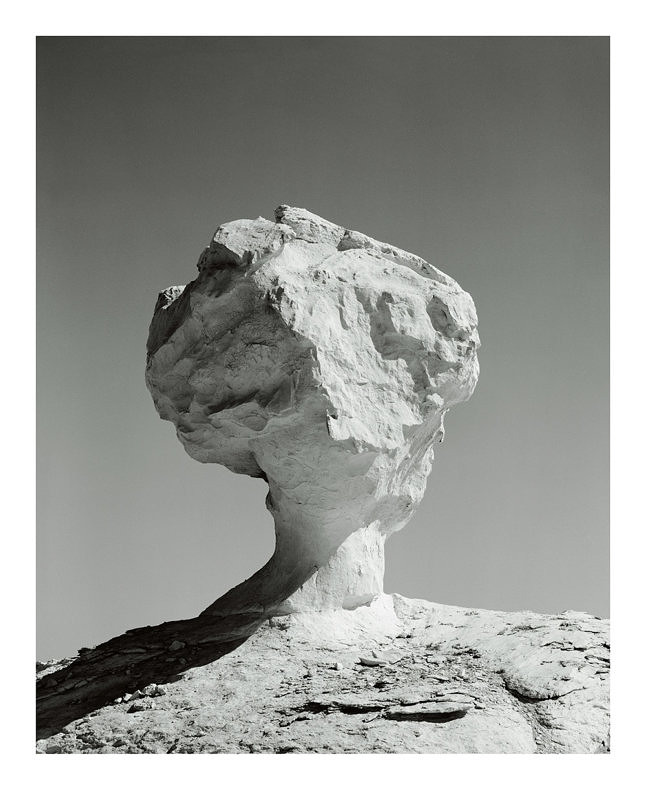 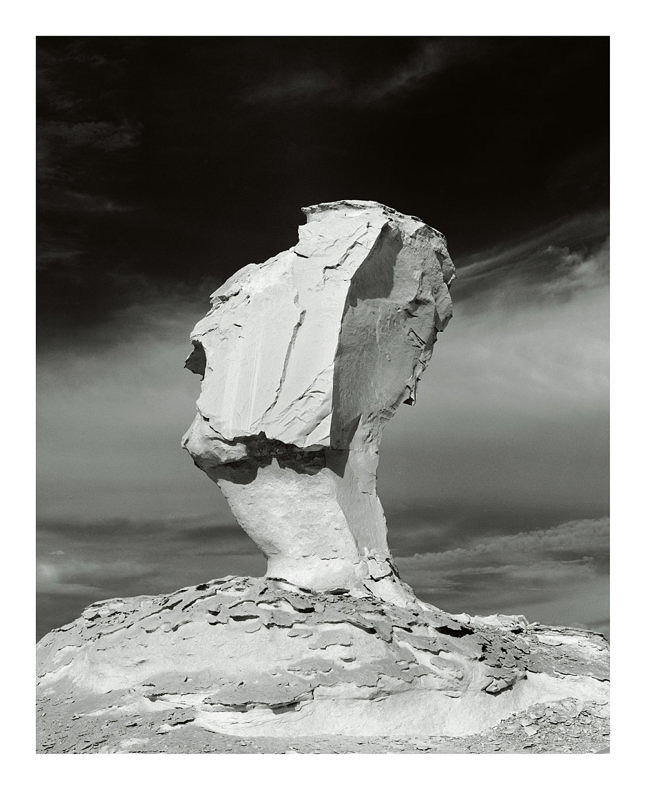 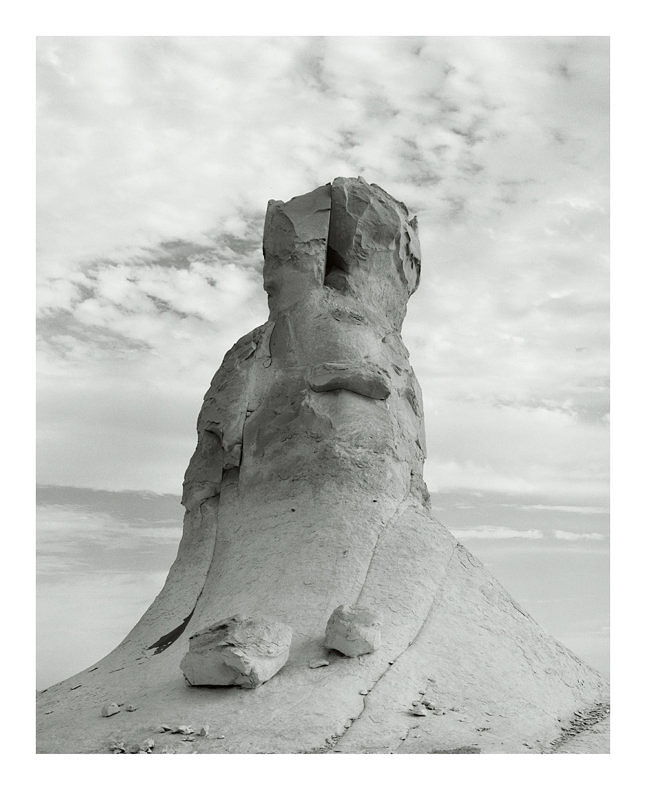 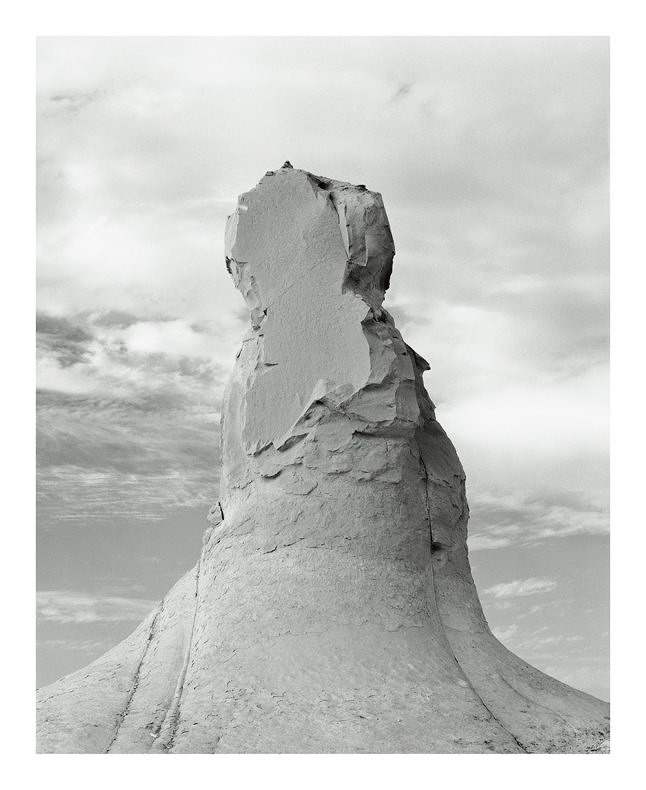 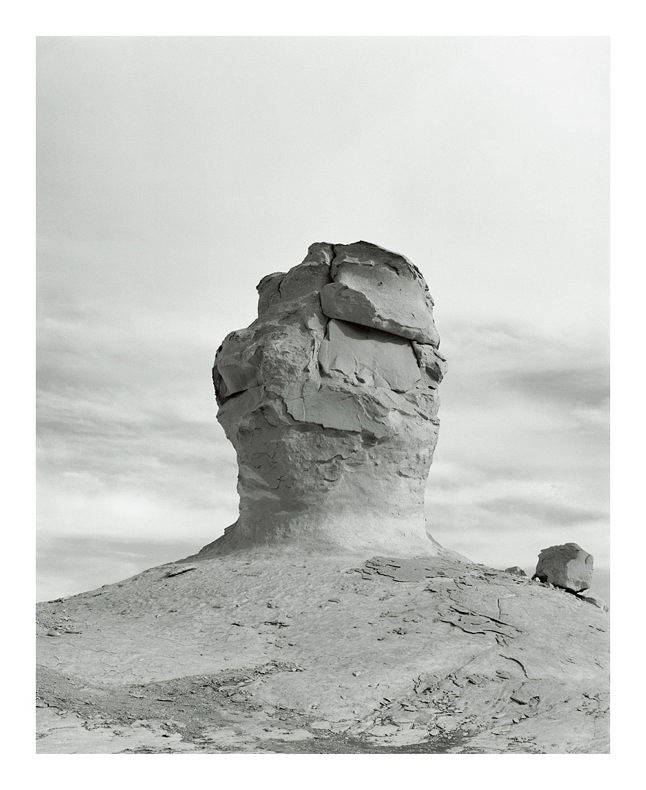 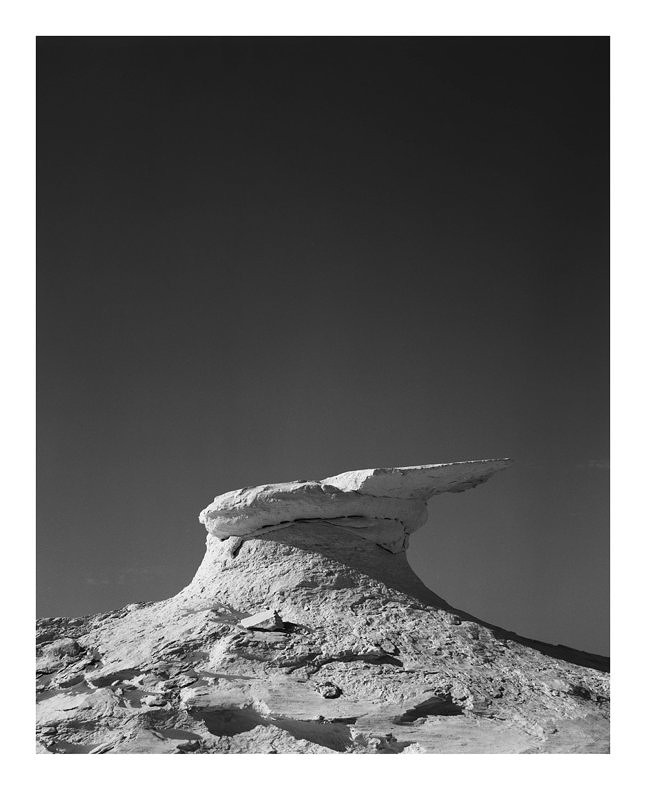 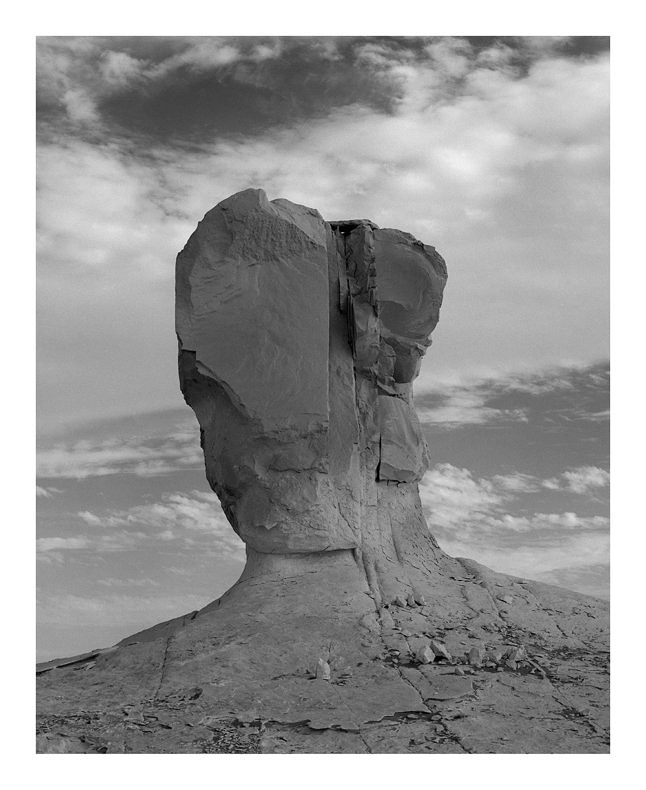 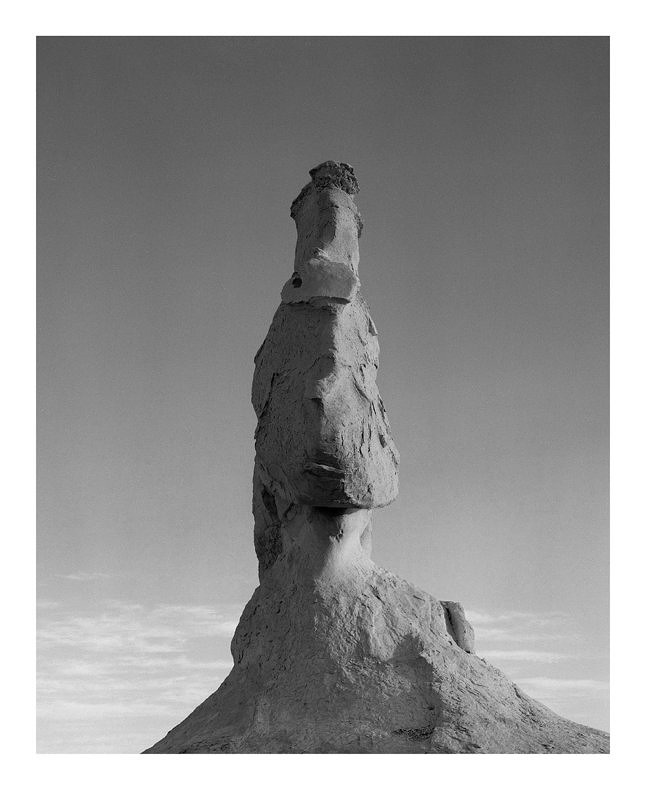 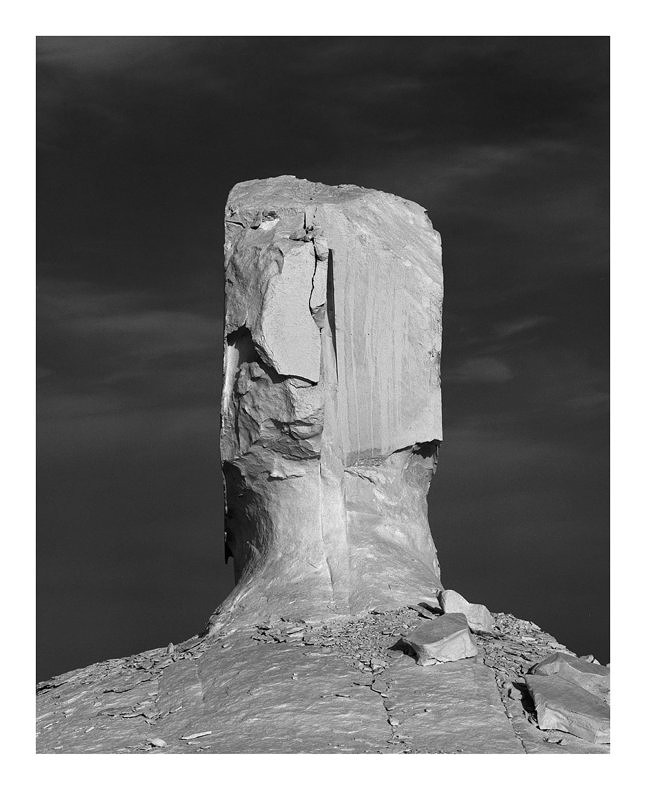 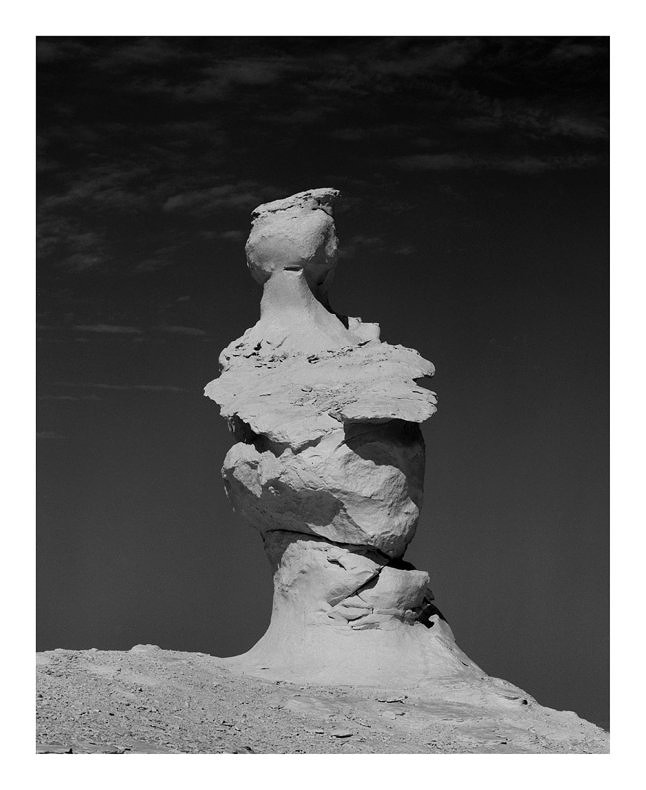 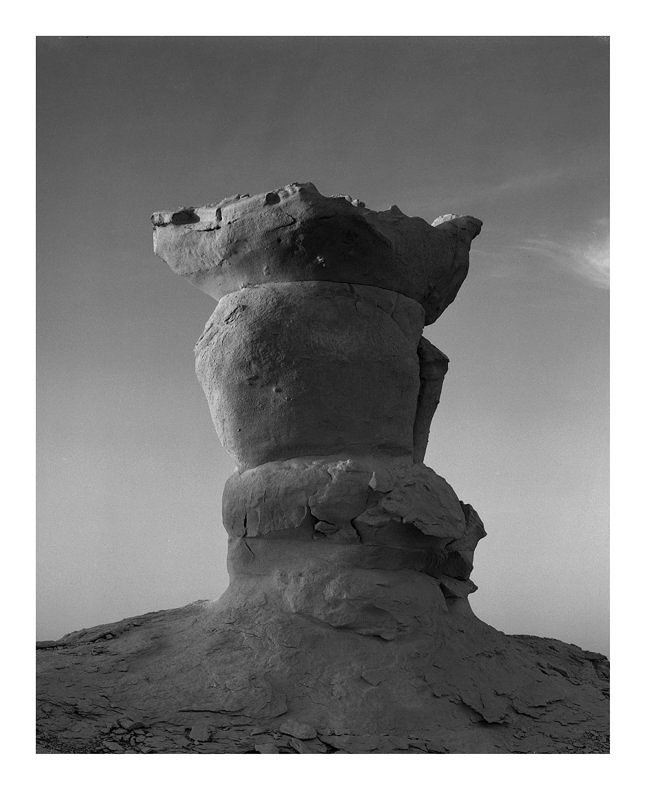 The Erratics takes Wilhelm Worringer’s 1906 essay Abstraction and Empathy as both a background for the work and as a means to consider the nature of the photographic medium. Writing before the advent of Cubism Worringer seeks to understand artistic intention. proposing empathy as our need to connect to the visible world, identifying with it and representing it. At the opposite end of a continuous spectrum, abstraction is a means of coping with the overwhelming phenomena of the world through extracting things from their place in space and time and distilling them to purified line, form and colour.

Seeking out monolithic chalk forms in Egypt’s Western Desert – a type of vast natural parallel to the singular objects I typically use in the studio – I photographed rock formations in as direct a way as possible, enacting my own urge towards empathy as both a connecting process and as a pleasure taken in my appreciation of their natural forms. These images – now subtitled Exposures – became my point of reference over the coming year, connection and departure points to both engage with and abstract from.

Both The Erratics (wrest) and (chalkfall in white) use sculptural compositions made from chalk collected from the rock falls along England’s South Coast. By carving smooth planes and shapes into the chalk I worked with and against its natural forms. In the photographic works – (wrest) – the chalk is shaped towards the two-dimensional image surface of the print, while in the installation (chalkfall in white), the perception of a flattened image surface is created within the three-dimensional forms themselves.

Within these gestures – and in the interaction and overlap between appearances and processes that make up the works within The Erratics – I see a tendency towards both abstraction and empathy, depending.